Repo (2005-2010) was a dog whose well-bred working-lines parents were acquired by a Border Collie puppy miller in southern Missouri. After a tip was called in in 2005, the sheriff’s dept. found Repo and his brother in a cage of littermates who had died of starvation. His dead father was on the ground nearby, among many other casualties.

Over two dozen puppies and adults were confiscated by the state and taken to a puppy mill auction house for sale to other puppy mills. There, I rescued Repo and five others, intending to place all of them with dog sports friends. Four found homes immediately, but Repo stayed on and eventually became my (unintended!) fourth dog.

At the age of only 8 months old, I was offered $10,000 for Repo and told by two national and international sheep herding champions that he was the “most talented young dog” they had ever seen. I instead sent Repo to my friend, an international herding judge who trained Repo to herd sheep and cattle at an extraordinarily advanced level.

While we competed in herding occasionally, just before Repo’s second birthday, I decided it was unfair to keep such talent languishing in a suburban home without daily sheep access, especially as I was about to embark on a year of cancer treatment. So Repo permanently went to live with his herding instructor as his sole “indoor dog,” earning herding championships and high-points awards at the state level in two of the most competitive herding states in the country. He was famous for his stamina. On many occasions, he would hold sheep for dozens of other competitors’ runs, taking a break only to provide a trick performance over lunch. At the end of the day, he would do his own run, often placing in the top 3 of the most advanced level (Open). 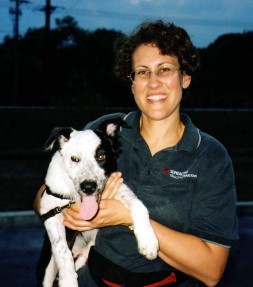 At the age of 4 1/2, Repo died after being chased by coyotes into a county highway. This happened just a week after winning the state “high points” award in Missouri, a very competitive herding state and home to two UK International winners. If he had survived, he would have been a contender for the 2010 USBCHA National Championships. We all miss Repo a lot and will never get over his tragic loss. However, I do not regret letting him spend those last 2 1/2 years doing what he loved every single day.

I hope you will take the time to watch this memoir of Repo’s fascinating “rags to riches” story.