As somebody who enjoys performing with my pets onstage, it is always a treat to be in the audience enjoying other trainers and their animal partners.

Today, I went (without Dash) to the Wisconsin State Fair, near Milwaukee, to participate in their dahlia show. Besides dog sports, this is my other time-consuming competitive hobby. 🙂 I spent most of the morning staging blooms and enjoying the air conditioning in the horticulture building.

But I couldn’t resist sneaking out in the 93 degree heat / 90% humidity to catch two of the performing animal attractions at the fair. The first one I saw was Sea Lion Splash, which featured two Patagonian sea lions and a trainer/narrator team. They all just travel part-time, and have a home aquarium too. They have an amazing semi-truck/stage with two pools that looks like it would take about a month to set up. Everything was pristine, and the animals seemed to be working very happily.

I’m always impressed by the sea lion talent of being able to read almost invisible cues from the trainer. Then I learned these animals were around 15-17 years old, so they DO have a longer time to learn “vanishing cues” than the typical dog.

Here they are doing a great trick: balancing on two flippers and one flipper (partially obscured). 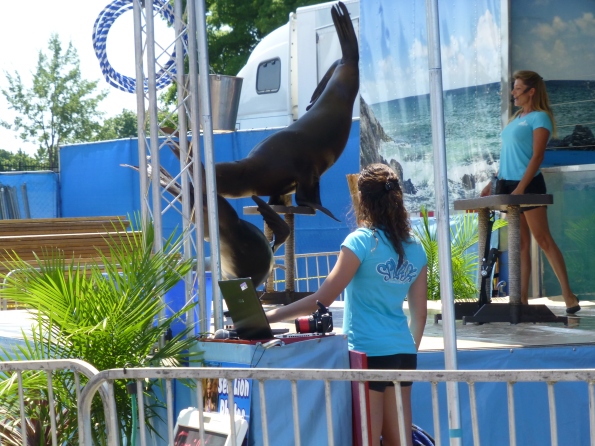 I was also able to catch the last of three hourly performances by Michelle’s Magical Poodles. I could tell immediately she was a class act when I noticed she had put a large fan, umbrella and fresh water on stage for the dogs, and told the audience that she would be abbreviating the performance due to the 93 degree heat. 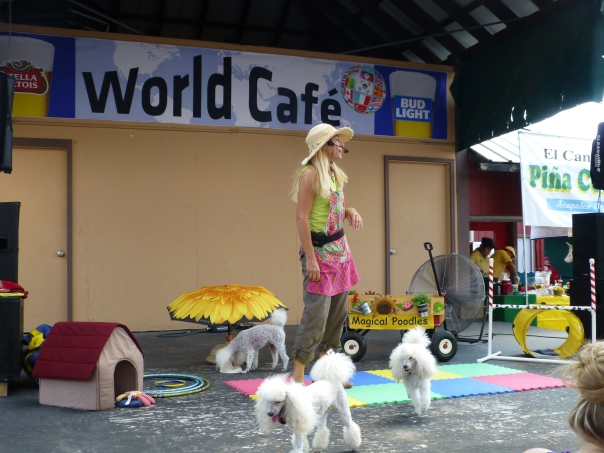 Disregarding their handler’s concerns, her three adorable and talented poodles kept a cheerful attitude. They danced and jumped on cue, when most dogs would have run for the A/C of the horticulture building.

Michelle has been performing for over a decade, so she has worked out an entertaining show that requires minimal, lightweight props. I liked the cute garden theme for this act, too. Michelle wears simple sportswear with a floral apron and sun hat. The dogs both travel in, and station on, a red wagon decorated with garden-related items.

The shade umbrella on stage is a sunflower, to complete the garden theme. I thought this was a really cute idea for fairs, which are first and foremost about celebrating agriculture. Because of her act’s name, she also has a magic trick as part of the show.

I was very impressed with the calm, friendly natures of the dogs. I’ve noticed some performers who are very concerned that a spectator might touch one of their dogs. By contrast, Michelle’s dogs (on their off hours) happily go to the edge of the stage to meet any kid that happens to be there and stand quietly for petting. So nice to see people performing with dogs that are well-mannered, friendly, and child-safe.

Michelle, who is based in Florida, kindly agreed to meet me after the show so I could ask her all about life with a traveling dog act. Among lots of other great info, I learned that she puts on library shows around Wisconsin, so keep an eye out for her act at a library near you.

In addition to these acts, the fair has a large dog-event pavilion with dock diving and other sports. I was able to see a Nosework demo today. Next week, when I go back to compete in another dahlia show, I’ll try to catch some of the other events, including the dock diving, disc dog and police K9 demos.

If you get a chance to attend the fair, be sure to stop by to see the sea lions and poodles!