Time for a hip update! It’s been 17 days since Dash dislocated his hip. At about the Day 3 mark, Dash decided he was back to normal. Since then, he has been trying to dive on/off furniture, race squirrels across the icy yard, take stairs 3 at a time, and gallop around at full speed. The problem is that he is wearing hobbles and is supposed to be on crate rest only.

We’re rotating him between 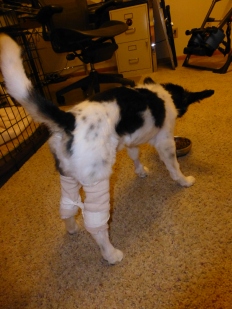 being tethered to us or doorknobs, in his crate, or loose and chewing a toy nearby. We’ve had to catch him mid-air to keep him from plummeting down the stairs with his rear legs hobbled together.

At the 2-week mark, Dr. Gallegos at Edinger Surgical Options had told me I could try him without the hobbles. However, when Dash would try to put his paws on our legs on the hardwood floors, his back legs would slide apart and he’d yelp. Not wanting any more “splits” to occur, I’ve re-hobbled him. I also ordered two different types of traction boots from Neo-Paws in Canada.

Our cool new custom circus prop has arrived, but I’m keeping it under wraps until Dash can model it himself. I actually got the call that it was ready about one hour before the call from mom saying that Dash had dislocated his hip.

He has an apt. with his ortho vet next Wednesday, and I expect that he’ll be able to have his hobbles off and start to SLOWLY resume normal activities at that point.

Thanks for all the well-wishes!